This article is provided by Aedes-Actiz Kenniscentrum Wonen Zorg and edited by the ISHF team. 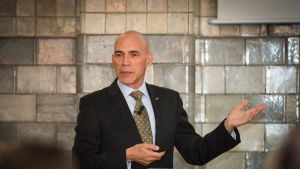 “The new townspeople will be old”, says Professor Jan Latten, Professor of Social Demography at the University of Amsterdam. “It’s not so much that the elderly go to the city en masse, but that people stay in the city and grow older.” Thirty-somethings flocked to town in the early 1990s, and are now in their sixties. From 2019 the majority of adults in the Netherlands will be over 50 years old.

When it comes to getting older in the city, according to Latten, the themes of security and loneliness are of great importance. “The elderly do not dare to open the door or step out on the street at night.” He believes that municipalities, corporations and ordinary people must do everything to protect the sense of security. And that concerns not just the private homes of the elderly, but also the public spaces they inhabit, too. Therefore, the elderly and multidisciplinary teams should together engage in designing the public space, to create an age-friendly city that is more than just wheelchair-friendly pavements.

In terms of loneliness, figures show that the number of single households is increasing. “People are having ever-fewer children, or none at all, and the number of divorces from people over fifty is also increasing. Certainly one in three divorcees are above the age of fifty-one. Loneliness is thus on the up. 50-plus people often miss out on spontaneous encounters, and that also applies to older couples. So architects and urban designers, planning scientists, can make a contribution by taking into account designs with the need for comfort, commitment and security. And the growth in the number of single people also has consequences for housing. There is a shortage of affordable, smaller, more flexible homes.” Latten sees opportunities for small-scale and collective living: “bonding through openness”.

Latten is concerned about the more vulnerable city residents. It is precisely these people who lack confidence in agencies and professionals. Less educated people have especially little confidence. The question to municipalities, corporations, and care and welfare organizations is therefore how you can overcome that distrust. The fact is that lower educated single women are at risk of modest income, and lower educated men are more at risk of loneliness. This is where housing associations can be of great help.