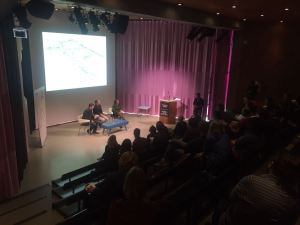 One of the key themes of this festival is migration to cities. How can the city ensure equal and just access to housing? At the conference ‘A right to the city a right to housing’, organized by the Jaap Bakema study center in Het Nieuwe Instituut in Rotterdam, 6 speakers on 2 panels discussed housing as a political issue. After presentations by Kenny Cupers (University of Basel) Anne Kockelkorn (ETH Zurich) en Jorg Stollmann (TU Berlin), who approached the issue from a historical perspective, we enjoyed three presentations that each referred to current strategies to get access to cities.

The first speaker of the second panel, René Boer (Failed Architecture), talked about squatting and the right to the city. Squatting can be seen as a contemporary urban practice, which happens all over the world. After 2010 it became illegal in the Netherlands, but in practice it is still allowed and it happens on a big scale. According to René, squatting is a democratic tool to intervene in the built environment, occupy vacant places, and create a collective right to the city by doing so.

Mirjana Milanovic (DRO Amsterdam) talked about the urgent need for more (affordable) housing in Amsterdam in order to adequately receive newcomers in the city. The municipality is planning on building 50,000 new houses in the next ten years. Important to mention is that people experience the right to the city as a right to the inner city. People don’t want to live outside the A10-ring in Amsterdam. Therefore, new policies include high-rise housing: housing has to be intensified in existing areas. However, in order to live up to the amount of places that is needed the municipality is also working on creating attractive projects outside the A10-ring of Amsterdam. These projects contain more space for individual and collective development and affordable housing options have to be integrated in those neighborhoods as well.

The conference ended by a talk of Dick van Gameren (TU Delft/Mecanoo). He spoke about Thamesmead and how this area was considered to be a slum area in which no-one wanted to live. Thamesmead had to be the crowning achievement at the end of the 60s, but the living conditions were unbearable and the whole area was geographically isolated from the city. Together with Peabody (a philanthropic organization) Thamesmead is being rebuilt and remade. The density will be tripled and a mix of high and low rise buildings should ensure access to a broad range of types and abilities of people. Moreover, a new railway station that will be placed nearby will ensure access to the city in a shorter amount of time.