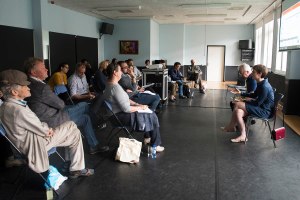 Housing First is an initiative that promotes the idea that affordable, permanent housing, provided with social support, is the key to breaking a cycle of homelessness. It is a model that believes quality of life can exponentially increases from the moment one has a home. The Housing First European Hub is a platform designed for discussing, collaborating, and learning about how to scale up the Housing First initiative. Professionals, public authorities, researchers, service-user providers, and nonprofit organizations from Spain, the U.S., the U.K., France, Finland, and the Netherlands all took part to provide an insightful exchange of knowledge about Housing First initiatives in a European context. The pertinent question to answer during this session: how do we practically meet the challenge of scaling up Housing First in a European context?

Ruth Owen, policy coordinator at FEANTSA, hosted the session. Housing First has been on the European agenda for a while, but it needs to become a more operational reality. Seven speakers from three different European countries provided context and examples from their city specific situations with regards to social housing and Housing First.

A key principle of Housing First is the idea that the users, the once or currently homeless, and their experiences are involved in the collaboration and planning of future Housing First initiatives. The operational details will be different within every country, but all partners follow the key principals, such as user participation in planning, assertiveness without coerciveness, and harm reduction tactics. If we want to work together on Housing First in different realties, we have to be open to operational diversity with adherence to a set of core values.

Different professionals from Liverpool, Lyon, and Amsterdam presented their country specific experiences of scaling up Housing First initiatives. Kate Farrell and Chris Hancock from the organization, Crisis, in Liverpool discussed their Feasibility Study, the report for which will be published this July on the Housing First European Hub website. Corinne Aubin Vasselin, Director of Housing for the city of Lyon, and Cédric Van Styvendael, the new Chairman of Housing Europe and the Director General for Habitat Est. in Lyon, presented their roadmap to exploring Housing First solutions and their current social inclusion project for the most excluded. Karen van Brunschot, Senior Policy Officer for Federatie Opvang, the national organization for shelter organizations in the Netherlands, and Valerie Boogaard from HVO Discus, shared the context for the current homelessness situation in the Netherlands and the Housing First program in Amsterdam specifically.